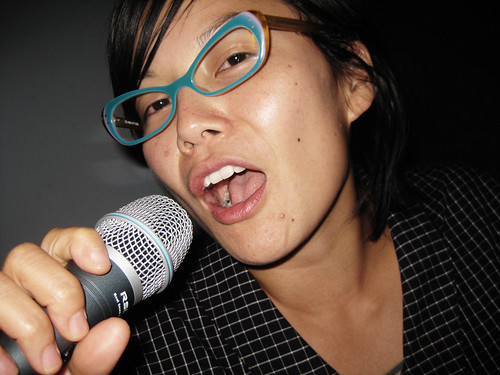 Anne’s a bit of a rockstar. She’s a jack of all trades and is always popping up in my day to day. Like this great interview with her by the Comics Reporter, this excellent article on film and pop culture at the Village Voice she wrote, her translation of the recently released Bat-Manga! (It’s a gorgeous book compiled by Chip Kidd), and her previous life as the PR and marketing muse for Vertical Press. Anne’s blog also provides a good laugh or two in the middle of a lousy workday.

Tell us a little about what you’re up to, your current projects:
Right now:
1. I’m E-I-C of a guide book series called MUSEYON. It’s the global guide book to cult-interests. You know, like, “Did you know this was the place where that thing happened that you’re really into?”
2. Without going at length (because I can’t), I’m also part of an arts fund.
3. Translating what might be the best manga on planet hard-core music. I get to write clit boners, “clam chowder” and rape-core metal, so you’d be safe to assume Detroit Metal City (manga in question) makes the hole in my o-zone open sesame.
4. I have nerd jobs I want and dabble in: T-shirt sloganeer for life, piano tuner, more creative writing (of course I want to be the next Emily Dickinson or something like that)… I think I’m okay at all these things, but I am a little bit in need of a lot of attention, so unless I start doing it humping a wall or actually get good at any of it, I’m just dabbling, in all honesty.

I usually just tell people I’m in publishing, and joke about how awesome I want to be, secretly telling myself “Shhh, it’s okay. You’re gonna make it!” After I hush myself from crying and am presentable again, I go back to grind work. I’m biding my time though. I don’t want to blow my wad too quick and ever say I’ve just written a fucking memoir.

Do you have a psuedo tshirt line? I really gotta do this. It didn’t really occur to me till you asked, but I will definitely think about it.

You manage to traverse the comic, music, and literary worlds fairly seamlessly, what are the things that interest you about these intersections? Language.

What are you currently reading? I just finished the His Dark Materials trilogy for the fourth time. Also, not a major sci-fi nut per se, but re-read the first and second volumes of the Crystal Cave trilogy by Mary Stewart again, and started another Margaret Weiss book. I’m compulsive about the entertainment I likes. I re-watch movies all the time and started re-reading books this year like a pathology. I spent one summer watching West Side Story every day for what I think might have been the entirety of an August. This is also why I don’t mind watching reruns of Law & Order et al. Not like its on three different channels at any given moment in time and space or anything… I want to clarify too that I read a lot for work and I’m not counting any of that. Even the good stuff.

What are you currently listening to? Rape-core metal. Actually I think I am missing the digital music revolution gene or something; the ease with which we can find downloadable music now has totally ruined my ability to enjoy it. I listen to what WFMU tells me to on its blog, and then mine The Wire (UK magazine and not Baltimore-set show or SF-based tech pop culture mag) for something to think about… half the time I am just glad I didn’t decide to try to become an experimental musician. Experimental writer? Fine. Ten thousand guitars playing nothing? Hmmm…

Favorite place to eat in the neighborhood: Red Hook is a terrible place to judge eats because it’s not like there’s a pedestrian district or anything. The most obvious foodie haven is The Good Fork. Bar none, the best place to eat, maybe in all of Brooklyn. But it’s expensive, so I go there once a never. I actually like the podunk Chinese wall-hole “Ling Gee” around the corner, because I can tell them what I want. “Can you steam some green beans and then toss them in black bean sauce and put that on brown rice with some pickles?” It’s less a restaurant and more like a remote cook.

Little known fact about your neighborhood: Red Hook is in the same congressional district as Manhattan’s Chinatown and Williamsburg, forming a U-shape that wraps around the Cobble Hill-Carroll Gardens-Park Slope trifecta of gentrification, which is geographically retarded.

Favorite watering hole: In my neighborhood? Sonny’s. Even though I’ve only been there twice. Love that place. Also, Botanica. NYC at large: WXOU on Hudson at Charles in the West Village. My favorite bartenders ever.

Best pizza in your hood: The pizza in Red Hook is bad enough that you’d be better off going up to Grimaldi’s under the bridge.

If there was a movie of your life, what neighborhood would grace the opening scene? Picture this: I’m Anne Ramsey, and it’s not any of the movies she’s in, but like a composite of The Goonies and West Side Story right before the rumble. Big dance scene on the pirate ship the Goonies discover. Something really fantastical like that — kinetic fantasy and geographic fantasy. We burst out of the cave and face West Seattle or something. And the sunlight turns me into someone fucking hizzot. Like, not Anne Ramsey.

What is your all time favorite monster and/or horror movie? Man, I think I just described it. Otherwise, definitely Running Scared with Paul Walker. Most retarded movie ever.